Wallace Gilchrist has been breeding his cows by artificial insemination since 1984. Until recent years heat detection was achieved by using a “spotter” bull equipped with a chin ball marker. Cows were bred one at a time when marked by the bull. Since 2013 we have switched to a heat synchronization program which results in nearly all treated cows coming in heat within a two to three day window. For heat detection we use Estrotect heat detection tags which turn red as cows in heat mount each other. Most cows are observed in heat and inseminated within a two day period. We usually get 75% 80% conception from one breeding. Since 2016 we have used a home grown clean-up bull to settle the few repeat breeders. We breed our cows the last weekend before Christmas each year. The  “repeaters” breed again 21 days later. This results in nearly all calves being born from late September to late October. Cows bred on the same day will not all calve on the same day. Cows are not noted for their talent for reading calendars.

Soon after winter hay feeding begins in November, fall calves are trained to eat creep feed and have free access to ryegrass and wheat pasture by way of creep gates. Calves learn to come to calling, which makes later handling much easier. Other than the winter creep feeding and a free choice protein supplement, calves depend on milk, hay and grass to grow up healthy and heavy. We have found that forcibly weaning calves or yearlings is not necessary. Cows will dry up and naturally wean their keeper heifers or unsold steer calves a month or two before birth of their next calf. It is rare for a yearling calf to start “thieving” from its newborn sibling. 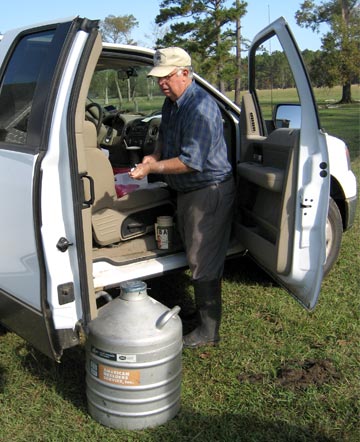